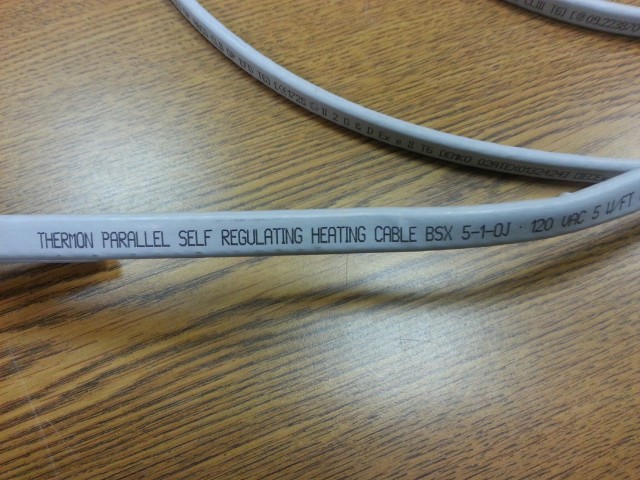 One of Delta’s long time clients called with an unusual request inquiring if a TDR could be used to help locate a short circuit in a section of heat trace wiring.  This client has had Delta TDR its’ PLC communication systems for years and knew of our expertise in utilizing the equipment.

We responded to the request with a “I don’t know, but we are willing to try it!” If successful, this could prevent the replacement of hundreds of feet of heat trace wiring, plus all of the removal and re-installation of the insulation and protective metal cladding. Arriving on-site within the hour, we were met by the electrical contractor at the clients’ site. He had contacted the heat trace wiring manufacturer, and was informed that this cable could not be checked that way and told us of that conversation. We still decided to proceed with the testing/troubleshooting. A 10 foot sample of the heat trace wiring was obtained to calibrate the TDR to the proper VP of the cable. During this calibration process, we shorted the cable to determine if the TDR could detect the short. We easily determined that this was the case and continued with the calibration. Once that was completed, we connected the TDR to the suspect cable. and determined that there was a short at approximately 19 feet from the test location between one conductor and the shielding. The electrical contractor, using a tape measure, measured the distance from the TDR to a point on the piping, 19 “cable feet” away. The metal cladding and insulation had to be removed in that vicinity. As the contractors were removing the metal cladding we noticed that the “short” indication on the TDR was intermittent. This information proved that we were near the short, and was relayed to the contractor. As they continued to remove the metal cladding, in the process of removing a sheet metal screw, the short disappeared! Success!

After the remaining metal cladding and insulation were removed, it was evident that the sheet metal screw had penetrated the heat trace cable causing the short.

This exercise prevented the cost and time involved in replacing all of the several hundred feet of cable, insulation and metal cladding.

Delta proved that its’ willingness to assist the client in any way possible is at the center of our core business.

VP: Velocity of Propagation, the “speed” of electrical signals within a cable reference as a percentage of the speed of light ( I.E. 82%).