Modbus Plus Super Tap: Features and a ‘Gotcha’

Posted on October 4, 2011 by deltaautomation

The Modbus Plus S 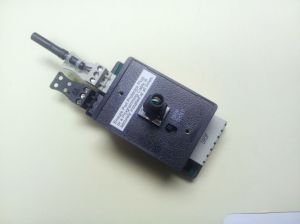 uper Tap is a vast improvement over the previous several designs that have been in service since the mid-eighties. The first connector to be used was the MBKT type. It had split type compression connections and used the continuous daisy chain type ground scheme. The next was the Tee type which used the AT&T type type of press on connector and an isolated grounding scheme. This was the first type to utilize a “drop cable”. The also is a third-party tap manufactured by Phoenix. This uses screw type terminals, has a switch for the terminations, uses a drop cable, and has a jack for connecting a programming terminal. There is also a ruggedized tap. It uses screw terminals and a drop cable in a small square cast metal enclosure. AVOID this ruggedized unit!!

However the switch should NOT be placed in the short position if the drop cable is present and installed, other than for temporary troubleshooting purposes. At D.C. levels this does not present an issue, but at higher frequencies, such as the frequency of the MB+ data, it appears as a short tuning stub. This may alter the wave shape of the data and ultimately cause errors. This anomaly presents itself on a TDR as a sight downward transition, or short. This is indicated below, in the screen shots from a TDR on a system with the switch in both positions. These traces were taken from an actual MB+ system that Delta Automation was performing a network certification.  This was on a spare tap located in a very remote hard to reach location.  The fix was simply to remove the unused drop cable. 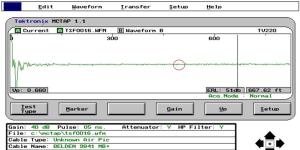 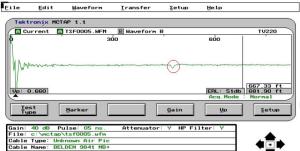 Another issue with these units is the auxillary programming port. In normal conditions, there is a protective shorting plug that should be installed. Be certain that it is installed and never take it out! The simple act of plugging and unplugging this shorting plug, whether to use it as a programming access point or some other function actually opens the Modbus Plus trunk line and may cause system errors or a complete network crash. DO NOT use this plug port! There have been many occasions where the port receptacle has stuck in the open position and the entire network goes down. If you need system access, install a spare tap.

6 Responses to Modbus Plus Super Tap: Features and a ‘Gotcha’